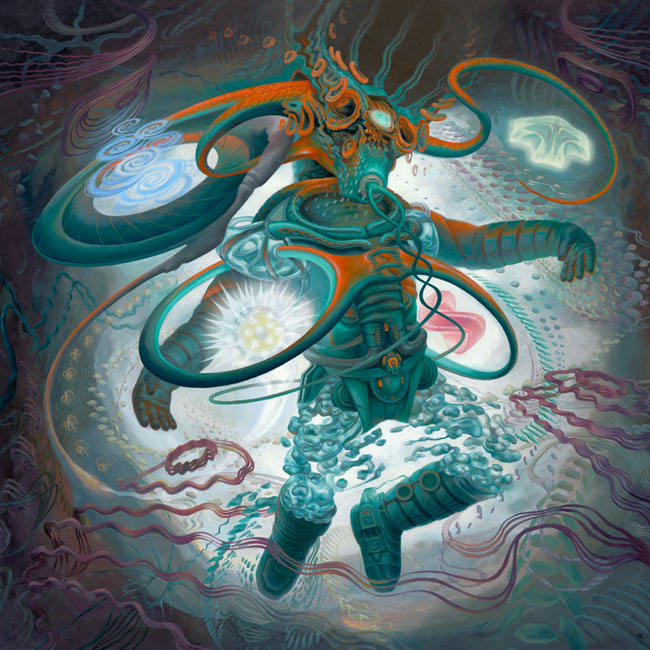 Coheed and Cambria have come a long way in their story of The Amory Wars. The first part of their epic double-disc story, The Afterman: Ascension does more than just hold its own as their sixth release. The prog-rock/metal band have stretched their musical landscape on each album, and this album proves to be no different.

“The Hollow” sets an almost eerie tone for the album with its piano overlay. Its calm echo builds to an almost painful effect that the story behind this album will prove to include a ‘perilous journey’ for the characters, and the listener. “Key Entity Extraction I: Domino the Destitute” clocks in at 7:51, and the intro is prog-rock/metal worthy in the riffs, and gets into high gear with the poly-rhythmic drumming. Towards the middle of the song, it changes direction slightly to slow down and create an atmosphere of fear or disdain just before kicking back into high gear to infer a feeling of haste.

Up next, “The Afterman” leans toward the ballad-end of the musical spectrum. In an almost hushed whisper, Claudio Sanchez sings above lightly dancing fret-work and a solid and reaffirming beat. Kicking off with a classic-style hard rock guitar-riff, “Mothers of Men” combine Sanchez’s trademark vocals with the hard-rock chugging of the guitar and bass. “Goodnight, Fair Lady” seems to echo the composition of past albums. I hear elements of “Crossing the Frame”, “Once Upon Your Dead Body”, “The Suffering” and “Mother May I” from Good Apollo, I’m Burning Star IV, Volume One. Perhaps its a nod, or a refrain, toward one of their most popular albums.

“Key Entity Extraction II: Holly Wood the Cracked” is a brief, but energetic number. The chorus is catchy in how “Holly Wood, Holly Wood” is sang and repeated. Look for it to stick in your head very quickly. “Key Entity Extraction III: Vic the Butcher” is loud and abrasive, just as the name “Vic the Butcher” is alluded to. The ending works as a slight introduction when it cuts off into a piano piece, with a voice-over that is just creepy.

“Key Entity Extraction IV: Evagria the Faithful”, Sanchez’s vocals are reminiscent of earlier works, as if it is another nod to their music from the past. A strong song, it coalesces toward an atmospheric and beautiful bridge. Eventually, the song ends in a fun and energetic beat that is almost tribal by design. The album ends on a much softer and subtle note called “Subtraction”. Sound effects are employed as musical notes, and it works. Lyrically, the song sounds like a make-up and break-up song. The meaning could be interpreted several ways, but it leaves the album open-ended enough for the second part, The Afterman: Descension, due out in February 2013.

“The Afterman” and “Subtraction” stand out on the album. Musically, they show a very different side of Coheed and Cambria and add musical depth that they have not tread in too often. I’m looking forward to hearing the rest of this double album, and it can’t come soon enough!

Purchase or preview your copy of The Afterman: Ascension by Coheed and Cambria on Amazon: