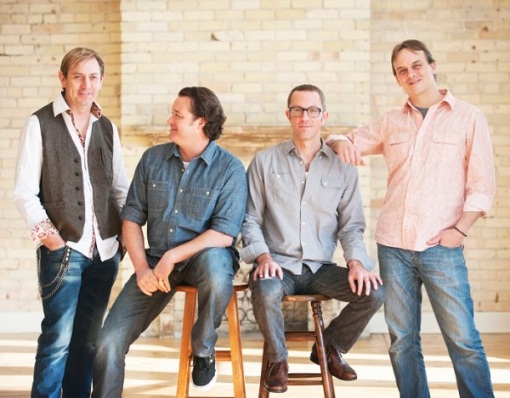 “The EP had to be titled Strong Enough to Last if only because some producer took eight-plus months to never deliver the first one. He held our masters hostage to try and leverage more rights for himself. Bad move. We don’t roll over for scammers, and we never give up. So we saved our nickels and went out and recorded the whole thing all over again — better. Eventually he’ll hear it on the radio, and maybe drive right into the ditch? We wouldn’t want anybody hurt of course; but we’d pay money to acquire one of his set-off airbags.” – Willamena

“The EP title also reflects our history. We’ve been called ‘indie underdogs’ and ‘indie heroes’ and any number of ‘Rocky’ references over the years, and while I don’t know about ‘heroes,’ some of that’s factual. Basically every label A&R rep turned us down; most of them repeatedly. But we keep slugging along, and they keep getting fired. Now we’re earning more radio airplay than no small number of big-money acts can buy. From the single: ‘close your eyes and dream,’ right? And like we put in all our liner notes: ‘long live indie!'” – Chad Hendrickson

Willamena has also released a fun and lighthearted, DIY video for their radio and Billboard charting, hit single “When You Close Your Eyes.”

“The lyric video for the single’s as ‘indie’ as it gets. Total budget: $0. So, sorry, VH-1. We’re not getting on. We spent the money on Grammy winners for mixing & mastering instead. Maybe it looks exactly like a $0 clip, but DJs in exotic places like Greece and Australia (and South Carolina) love how it sounds.” – Willamena

Track List:
1. Strong Enough to Last
2. Open up the Stars
3. As Long as I Can
4. When You Close Your Eyes
5. Darkest Before the Dawn

Click HERE to Stream Strong Enough To Last on Spotify!

Willamena is a rarity — a nationally-charting genuine indie band. Strong Enough to Last (mixed by Grammy-winner Cameron Webb) is the band’s sixth studio effort. Advance single “When You Close Your Eyes (Radio Mix)” was on the radio even before the EP went to replication, and it debuted on the Billboard Spotify Viral 50 soon after. So all the arrows continue to point “up” for the award-winning #1 Kalamazoo rock act (dubbed “the hardest-working band in Michigan” – music.AllAccess.com 10/20/15) whose music has aired from Japan to Montana to Greece.

Their fifth release, The Light Ahead hit the streets and the airwaves in January, 2015. Before the release date of “The Light Ahead” lead-off single, “The Other Side of Loneliness,” debuted at #5 on the Billboard AAA indicator most-added chart (1/17/15), started at #3 in AAA downloads and streams on radio-servicer PlayMPE.com (1/2/15), and jumped straight onto the FMQB AAA top-200 singles chart at #110 (1/20/15) – all without professional promotion or a publicist. “The Other Side…” peaked at #87 on the FMQB singles chart, stopped only by a lack of “promo” spending. The EP itself climbed directly to #1 on Amazon.com’s “Hot New Releases” Adult Alternative list (1/17/15) and cracked the top-100 on the FMQB AAA non-comm album chart. The follow-up single, “If This Is Love,” charted nationally as well, and third single “Way Back When” spun on over 200 radio stations world-wide. As RadioInfo.com observed, “… it’s definitely a marketable sound that makes for some hit triple-A playlists… and hot AC/AC stations that wait patiently for their turn …. We are keeping our ears on them. So should you.” (RadioInfo.com “pick of the week” 1/14/15).

But “The Light Ahead” was no flash in the pan. Willamena has been impressing programmers, critics and fans for years. The band’s 2013 CD Lost in the Shadows and its tracks charted nationally in six radio formats: Top 40, Hot AC, Triple A, Active Rock, Americana, and College. At least 180 terrestrial stations in six countries aired something from “Lost…” not counting syndicated-show affiliates that pushed the total well over 300. Several critics predicted the success of “Lost in the Shadows” from the get-go:

“… [U]ndeniably infectious rock…” “… [T]he standout tracks… could do some serious damage on U.S. radio in 2013. And that means there are songs on this album you’ll likely be humming in your sleep.” John Sinkevics, Revue Magazine and http://www.LocalSpins.com

“… [Lost… has] a very polished sound that suits their seemingly effortless radio-ready rock anthems perfectly… [It] should help… give them the national attention they… rightfully deserve.” – Justin Kreitzer

“Lost in the Shadows” followed 2004’s “Far From the Current.” “… Current” aired on then-emerging AAA stations from Seattle to Staten Island to satellite (XM Unsigned’s “most notable” and “most played” lists) on a near-zero budget and made its own mark in the music world:

“Willamena… turn the Northern superiority complex against itself with devastating results in ‘Rock-n-Roll.” Dave Queen, Village Voice 9/26/05 re: “… Current”

“I keep thinking, how could a band with this talent and sound not be on a big label… will these guys ever run out of hooks?” Bill Ribas, NYRock.com 3/5/2005 re: “… Current”

“…[P]op rock, in the vein of Matchbox 20, Counting Crows, modern U2, etc… a familiar rock sound culled from decades past, [but] the sheer craftsmanship… in the music keeps [it] from coming across as a stale rehash… Comparisons aside, Lucas Ross is a great rock vocalist…” Alan Moore, LoveLaborMusic.com 6/14/2005 re: “… Current”

“Perhaps the real risk for Willamena is writing a great album that no one will hear.” Nick Stephenson, Recoil, 2/04.

Simply put, after “… Current” came out, tough times got tougher. Willamena’s home base between the coasts and lack of industry connections (or cash) had always hampered the band; what turned out to be “the big crash” didn’t help. Neither did Napster, or NAFTA, or club closings, or slashed label rosters, or the cratered economy which scattered so many Michiganders, and the band, around the country seeking work. In mid-2009 the band went on a reluctant hiatus.

So despite winning the 142-band WBFX/Aris Hampers Rock Search in 2001… and despite making head-turning original rock like the 2002 CD Ghost of July which produced rave reviews like these:

“Willamena are the Derek Jeters of local music… Along with their kick-butt live shows… “Ghost of July” is putting these cats on the bus that says “Major League…” Buddah Worthmore, Music Revue, 5/2002

“’Ghost of July’ could be the most solid release from a local band this year – a sonically-superior recording showcasing emotional performances and… gifted songwriting… highly recommended…” Recoil Magazine, 6/2002

… and despite headlining at premier clubs from Milwaukee to Manhattan and outdoor festivals, and opening for national acts like Fishbone, The Why Store, and SR-71… and despite earning “… the reputation of being the hardest-working act in Michigan…” (The Buzz, TheIndustryResource.com 12/22/04)… and despite maintaining the title of “… the hardest-working band in Michigan…” (Carly Plank, Revue Magazine 6/20/13) years later… Willamena remained unsigned and, largely, undiscovered.

Undiscovered, that is, until the rise of internet radio, and LPFM, and the Triple A radio format, and accessible technology that brought Willamena’s music out of obscurity. Beginning in 2011, world-class recording pros including Gravity Studios’ Doug McBride (Fall Out Boy, Rachael Yamagata, Veruca Salt), Grammy winner John Seymour (U2, Santana, Dave Matthews Band) and Grammy winner Cameron Webb (Kelly Clarkson, Social Distortion, Motorhead) began to take an interest in the band, contributing their talents on various tracks (and on decidedly non-major-label budgets). Throughout 2012, ‘13, and ‘14 radio stations all over the U.S. and internationally-syndicated programs latched on to Willamena’s hook-filled songs, and the stage was set for 2015’s “The Light Ahead.”

Music fans around the world have been figuring out what the major labels have missed so far: Willamena has the goods. Strong Enough to Last is another collection of original, radio-ready Midwestern rock n’ roll, and it’s set to line the band up toe-to-toe with major-label acts on radio playlists around the globe.

“‘… Clearly, Lucas Ross is a great rock vocalist, and carries dynamics the way that Fred Neil did, and Rob Thomas and Bono still do…” KZHP Sacramento

“There is plenty to like here and these guys should really make a splash on the music scene… Expect great things from Willamena. They’ve got the chops to achieve them… 4.5 stars (out of 5).” – G.W. Hill re: “Lost in the Shadows”

“… Their music is ready made to fill arenas…” John Verburg, WestMichiganIndie.com