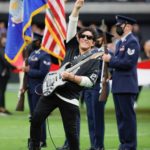 LOCKJAW Returns with Official Music Video for “Silence the Fear”!

Carolinas based heavy rock band THE LA MAYBE–fronted by lead singer Alvi Robinson, made famous when he…

FOR IMMEDIATE RELEASE: August 23, 2021 – Gothic/Industrial artist, NUDA has just unveiled her new video for the…

THEM DIRTY ROSES Announce 2021 US Tour Dates Through September!

On Wednesday, Rancid and the Dropkick Murphy’s dropped into Kansas City to play one of…

JEFFREY NOTHING, former vocalist of industrial metal band MUSHROOMHEAD, has released the official music video for…