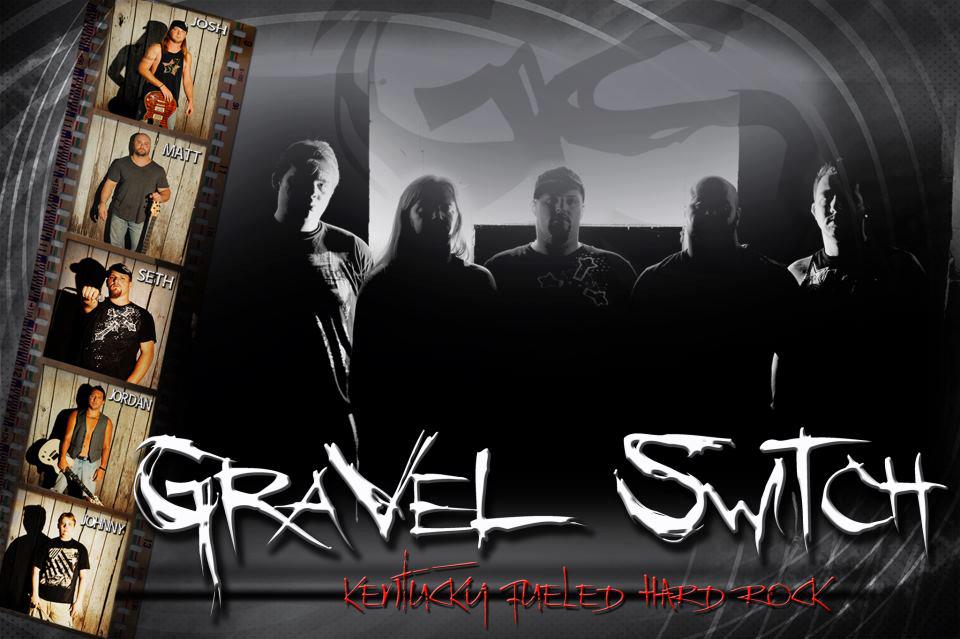 Gravel Switch is band that’s been on our radar for a few months. We’re always looking for Unsung Artists that deserve a little push from our end. This band packs a hard rock punch that just many would find unusual coming out of central Kentucky. These local boys have been playing their custom-blend of rock around the state and surrounding region for a few years now, and I recently got to catch up with the band on their tour bus as they were about to open up for Sevendust.

I’m joined today by the entire band, Gravel Switch. I’m just going to jump right in here. Tell me a little bit about you guys. What brought you all together?

Seth: We are a conglomerate of something that started a long time ago. Josh is the only original member left. It’s just kept building and growing from him. We’d lose a member, pick one up. Gain traction, we would actually get better with every member. Our sound has grown with every member we’ve picked up. We just picked up our newest member four months ago and our sound is getting better and better. We’re getting ready to start writing again. I’m ready for this next album to come out, and make sure the sound’s getting better. We’ve grown every time we’ve changed. I don’t know of any other way to explain it. We’ve kept it all close-knit. All our old members are still our buddies. They come back in and step in for a show any time we need one of them. It’s crazy, nobody’s left on bad terms. People have grown, and their lives have grown away from playing music. We’re the only ones left who can still dedicate time of their lives for music.

You can check out our review of Gravel Switch’s album Face The Day here.

Tell me a little bit about the name Gravel Switch. I know it’s a community in central-to-western Kentucky. Is that what inspired the name?

Josh: Actually, it is. Our original singer, which eventually became our bass player, actually grew up around Gravel Switch. He’s not necessarily from there, but he grew up around there, and were kind of looking for a new name. We were actually going by the name “Livid”, and we didn’t like it. We rolled with it for a while, and then he brought up the name Gravel Switch, and it just kind of stuck.

Honestly, I think it’s a better name for a band than a town.

Josh: I agree, I agree!
Johnny: We’re working on changing it.

The town, or the band?

What are some of your influences? I had just listened to your album that you gave out to me in November, and I heard influences such as Saving Abel, a little bit of Shinedown, Three Doors Down, a little bit of post-grunge and hard rock.

Seth: A lot of that is exactly where I got my influence from. Me being one of the newer members of the band. Vocals from Pearl Jam, Shinedown, a little bit of Nickelback. Some of their raspier stuff. A lot of Sevendust stuff with the harmonies. We get a lot of our harmony work from Alice In Chains, and how they use octaves and half-steps. A lot of personal influences.

Josh: I think it’s what makes what we do. Johnny is a huge Foo Fighters guy, and Red Hot Chili Peppers. I’m into more hardcore stuff, like Sevendust and Breaking Benjamin. Stuff like that. We start to kind of mix that, and weird stuff starts to happen. It’s cool, and I think everybody’s pretty satisfied with that.

Jordan: Seth listened to a lot of Journey and Pink Floyd growing up. I was really pushed into Steve Earle, and Tom Petty, which is completely different from what we do. Somehow, it has all come into what we are.

Seth: I think that’s how we get the sound we do. We bring all our influences, our own personal touch, and mix and match it together to get what we want it to. I guess to top all that off would be the best example would be “Ten Feet Tall and Bulletproof” the face of that record coming in of a modern, heavy song that starts out with a banjo. That really sets the tone, and shows the wide diversity of the music we listen to.

Speaking of Sevendust, how excited are you guys to open for them tonight?

Josh: I’m so nervous, I can’t stand it!
Band: Nervous!
Seth: I think the reason why we love this band so much is that every single member is the best of their field. Drums covered, vocals covered, guitar is covered. Their bass player is phenomenal. That’s what we want to be. We want to be the best at what we are, as a group, but individually as well.
Josh: Another way to show how influential Sevendust are on us, Seth and I actually started out a little acoustic project for a while. We worked relentlessly to learn every Sevendust song we could.
Seth: We knew every South-Side Double-Wide song.
Josh: To me, I think about it consistently since the show’s come about. It’s just a dream come true.

You had mentioned earlier that you are looking to start writing your next album. Do you have an idea of what sound or direction you’re going?

Seth: It’s still going to be similar. Probably going to thicken the guitars a little, a little beefier. More open riffs. Then there will be some songs that will step back and be more melodic. That’s the way we want to write albums. We want to give you a wide variety, that way you don’t get bored. Put the album in, hit play, and listen to every song on it without getting bored by hearing the same songs over and over again. We want to give you different things to listen to, and listen for.

Josh: Some of the songs have been written. I’d throw some of the names at you, but we better keep them under wraps.

Johnny: Heavy is the direction we seem to be going.

To wrap this up, we usually ask a random question. Suppose you have two bands that are in a all-out brawl, to the death. What bands would you like to see, and who would come out on top?

As stoned as Keith Richards was, he was still functional!

Seth: Still functional, under that much drugs!
Johnny: It would even be better if was like MTV Celebrity Deathmatch, where they were all clay.
Josh: Something like Kanye West versus Blades of Grass?
Johnny: Wasn’t Korn on there once?

Thanks guys for having us, we appreciate it! Looking forward to see you guys power on!

Purchase or preview your copy of Face The Day below: