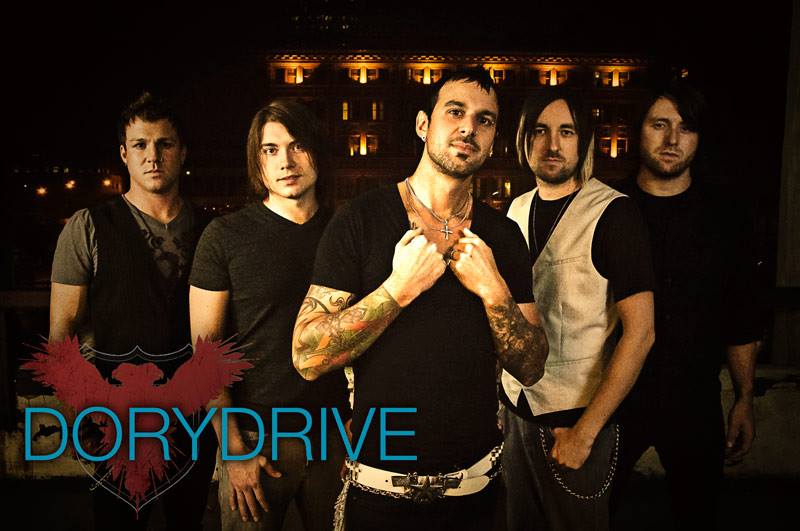 I have a lot of past experience in and around the music business. Since I’ve been running this site, I’ve run into quite a few musicians who I’ve worked with in the past. Some artists, I’m very glad to have discovered their new project. Others, not so much. Having said that, DoryDrive is a band from the Northern Illinois area that features Mathieu Nevitt and I’m excited to once again be work with Mathieu and his new band. When I saw him the first time,Mathieu was one of the most professional voices I had seen in an unsigned band. He had great stage presence, he was an approachable guy from a fans standpoint, and seemed to know what and how he wanted to accomplish things. I have had my ears and eyes on DoryDrive for some time, so when I was approached about doing an interview to help spread the word, I jumped at the chance.

Today I’m joined by Mathieu Nevitt from the band DoryDrive. Mathieu is the voice of the band and we’re happy to have him join us today. Welcome to the Unsung Melody family!

Hey! Thanks for having me.

Anytime. Here’s To You is the new album from you guys. Let’s start there. It’s being released on February 25th. What would you tell an old fan to expect with this record?

I would say it’s not much of a departure from our last record. We really just tried to build upon the success we had. We refined our sound and a couple of those songs were the foundation of who we are. They actually make it onto this record. We changed a few things. Some remastering and ideas, but if you have liked our sound in the past, then this record will be pleasing to you.

Having heard the record myself, it seems really polished to me. Not a lot of rough edges. What was the mindset of the band going into the studio for this record?

We really just wanted to continue to grow. I’m really glad you mentioned that there’s not many rough edges. That’s one of the things we worked on. Working with a new producer, we were open-minded, but at the same time we knew where we wanted to be. We changed some things, we kept some things. At the end of the day we just wanted to make a record we could be proud of and I think we did that.

Here’s To You is not only the title of the record, it’s the first single. First I want to thank you for getting the chorus stuck in my head. It’s kind of embarrassing to sing mo-oh-oh-ore in a hallway and have people looking at you oddly. So, I appreciate that. (laughter) Singles are really hard to choose, as each song is like a child. This album is loaded with melodies, how did you land on Here’s To You as the lead single?

Well, it wasn’t easy. We certainly had our input, but ultimately it was in the hands of our label and radio people. They do their homework and that’s their job. We had it down to probably four songs and the decision was finally made that it would be Here’s To You. Everyone felt that song gave us the best chance to do well on the Active Rock charts, but it also could easily crossover the the AC charts.

I want to discuss the track Paramour a bit with you. That song seems like a hit waiting to happen. It was one of those also included on your independent release, so you have to feel somewhat the same way. Tell me a bit about the process of writing that song, what it means to you and how it could help you conquer the world. Ha!

That song was one of the four. (laughter) The song was one that originally was kind of tied into the Vampire culture that has exploded. Ultimately we felt it was a bit too dark for what we were doing though and the song literally changed in a day. We worked on that day and played it that night. The word paramour, if you look it up in the dictionary, is a lover or maybe an extramarital affair. So it’s easy to think the song is about cheating, but it’s not. I have someone and so I did a little twist with it and felt it was a really fun wordplay.

The band signed on with First Launch Records. There’s not a lot of information out there about them. I suppose you could call them a startup. What were some of the things that swayed the band into signing on with them?

You could call them a startup. Although everyone certainly has their credentials within the music industry. When we sat down with them, knowing they were new was actually a big deciding factor. We were to be their main focus. Their number one. As a band, that’s what you want to hear. You want that devotion. You’re goal is to have success and when their success is also riding on you, you know the efforts going to be there. Being their priority was out priority, because you just don’t get that dedication, that determination from a large label anymore.

I do see a couple weeks worth of tour dates coming up. What’s in store for DoryDrive in 2014? Any big tours in the works?

We have four weeks planned out, we just haven’t posted the last two weeks. We’re looking at trying to find a tour that makes the most sense for us. Again, we want to do well on the Active Rock charts, but we feel there is some success to be had on the AC charts as well. We nearly went out with Emphatic, but they’re without a vocalist again. So that didn’t happen. We have some offers we’re mulling over, but nothing we can say for sure just yet. Other than the four weeks I mentioned.

I always end on a random question. It’s a tradition around here. I remember back in the day when you were with Echovalve and lived in Atlanta. In fact, you opened a show that I was the talent buyer for in Lexington, KY. You opened up for Hinder. You traded some gigs with some mutual friends in what was then Lithium, and became Valrosa. Now I’ve heard that you may have a tough time recalling much of the times you guys were together, as there were a few alcoholic beverages consumed.

Nooooooo. Not at all. I don’t remember an entire bar being opened up to us until 6AM. That’s all fabricated. Nothing like that ever happens.

Yeah, I don’t remember the Hinder guys behind the bar serving drinks either.

No, no. Never has anything like that ever happened. (laughter)

Well that wasn’t really a question, but I’m going to end on it anyway. (laughter)

Mathieu, I can’t thank you enough for your time. I know you’re traveling towards the snow, so please be safe out there.

We wish you guys all the best.