Thrash metal fans filled in at Fiddler’s Green Amphitheatre on Saturday, August 18th, to give one last hurrah to thrash metal pioneers and titans, SLAYER. Men, women and children of all ages, shapes, sizes, and cliques packed in the 18,000 person capacity venue to send the band out into the unknown!

After 37 years of recording and touring, the band still brought the brutal riffs to us, live! Throwing up the metal horns, fist pumping, fans screaming “SLAYERRRRRRRRRRRR!” permeated the venue from the moment one walked in. The crowd definitely knew they were in for a treat!

Made up of the stable core of co-founders Tom Araya (vocals, bass) and Kerry King (guitars) were well complemented with bandmates Gary Holt (guitars) and Paul Bostaph (drums), the band members were tight beyond belief. Founding guitarist Jeff Hanneman, having passed in 2013, was represented well with the music he wrote and recorded with the band.

The title track for their final album, the 2015 release Repentless, kicked off the brutal set, unapologetically. The excruciatingly vicious track was to set the stage for what was to come throughout the night. A full 90-minute set of thunderous rhythms, angry and harsh vocals, and the buzzing and thrashing guitars were filled with songs from early in their career to more recent hits and cuts.

Bounding between “Mandatory Suicide”, “Hate Worldwide”, “Jihad” and onto stalwarts “Seasons in the Abyss” and “Dead Skin Mask” showcased how powerful their music is to their fans. Even so, the crowd sang the chorus for “Seasons”, with Araya grinning on stage. This band knows what their fans like, and is more than happy to give it to them!

As for closing out the show, Slayer played a three song encore. Coming back on stage to perform their seminal hit, “Raining Blood”, the crowd broke out into frenzy. Instead of screaming out “SLAYER”, fans were perfectly content to listen to their final opportunity to hear it rain before their eyes. The Rick Rubin produced track will probably always be the most recognized song from their incredibly vast and solid catalog. 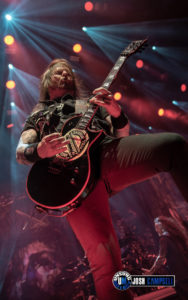 Capping off the evening “Angel of Death”. What a perfect way to put the band away to death, if not this? The lyric, “Test of heat burns your skin, your mind starts to boil” certainly rings true with the pyro that the band has been known to use on stage to bring the spectacle of their brutal sound.

Slayer, a band so well known and controversial, brought their heavy and thrashing show to a happy end for the night. Everyone looked perfectly content, and excited for the evening, with smiles and headbanging for good measure. Araya looked particularly grateful to be in front of a full house and playing his heart out in Colorado, one last time.