On Wednesday, Rancid and the Dropkick Murphy’s dropped into Kansas City to play one of the largest rock shows here in more than a year.  The show was at Grinders Pizza in the Crossroads neighborhood and yes, pizza was available most the night.  It’s an outdoor venue I had not been to before and it turned out to be just the right size and vibe for this show.  It was large enough for these bands fan bases but set up in a way that still felt like a smaller venue. The location was pretty easy to park at and the stage had the backdrop of some of the downtown skyline, including the much beloved neon Western Auto sign.   Both bands have pretty devoted fan bases that go back decades.  I remember listening to both these bands in an upperclassman friend’s car before I was old enough to get a license.  Now seeing them play together in my own city was quite a great experience.  The LA band confusingly named The Bronx kicked off the show while many people were still filing in.  I noticed the show being heavily promoted on Spotify and local radio in the days leading up to the show and the line was down the block when I arrived.  The show wasn’t overcrowded though and all the fans I crossed paths with were nice and respectful to people around them.  It was a large mix of different age groups.  There were some young children there with their parents mixed in with some older fans that I’m sure have been going to shows for about 40 years.  It was easy to tell who made it out for which band by the fan’s tour shirts, buttons, patches ect… but both bands fans seemed to really enjoy the whole show.

While the sun was starting to set Dropkick brought a ton of energy and were very tight musically.  I had wondered how the bagpipe and accordion would be in a punk show setting and they do an amazing job playing and performing.  They are legit full on rock stars and got the crowd going with their set list choices.  They opened with “The Boys Are Back” off their 2013 album “Signed and Sealed in Blood”.  It’s exactly the type of song with the big sing along chorus that you would want them to start off the show with.  They played a wide range of songs from their 10 studio albums including “Barroom Hero” off their debut album “Do or Die”.  I was excited to hear that one, it’s the album that got me into them and also the only album where they had a different lead singer.  I wasn’t sure if I should expect anything to be played from that album, so it was a pleasant surprise and really got the crowd down in front rocking out.  They closed the show out with a song that I now cannot get out of my head.  Rose Tattoo the charity single they put out for the victims of the Boston Marathon Album in 2013.  I know the song well but their performance of it live was especially impressive in an already impressive show. 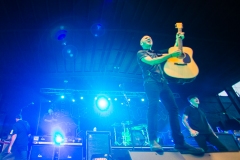 Rancid started their set off with 3 songs that can only be described as some of their most classic songs.  “Radio” from “Let’s Go” and “Roots Radical” and “Journey to the End of East Bay” from “And Out Come the Wolves”.  Local resident and musician Brian Klein shared a common appreciation with me of how they choose their setlists that spans their whole career but also feels like a greatest hits collection.  Some other highlights for me were “Telegraph Avenue” off their most recent album, 2017’s “Trouble Maker”.  It starts out with a melodic guitar riff reminiscent of their earlier work and Tim’s great storytelling in the lyrics.  Lars performing “The Wars End” solo was a very striking and attention grabbing minimal performance of a fan favorite song.  I’ve always found Lars’ story very interesting.  He dropped out of high school to play guitar and went on to have amazing success.  So many people say they will do that, or try to do that but Lars did it. Much more recently he’s been doing charity work with Project Homeless Connect with Tony Hawk in the Bay Area, providing skateboards to homeless teenagers.  During their set some other highlights were “Something in the World Today” and “Tenderloin”.  It was cool to see people reacting to the first chord of each song.  It was crazy to see the guys I saw as a teenager putting on such a strong show.  Many times when I go to see a group that is been around for a long time, it can be disappointing but with Rancid it’s the opposite.  It really brought a smile to my face getting to hear these songs and see these guys that had such an impression on me at a young age.  They never fell off like you’d expect most bands to do.  They closed out the set with “Fall Back Down” but came back for the encore with James and Ken of Dropkick.  They played “Harry Bridges” from “Let’s Go” and concluded the show with “Time Bomb” and “Ruby Soho”.

In closing, I found the show very enjoyable and definitely enjoyable if you’re a fan of the bands.  The tour was postponed due to Covid-19 but I’m glad they still went through with it.  There aren’t that many bands like Rancid or Dropkick, that can have a 30 year career and still really bring it live.