Dirty Honey. Dirty Honey… The name just feels so… sticky and… well, dirty. I suppose it is, and as a band name, it couldn’t be more apt for the fellas that are part and parcel of Dirty Honey. Dirty, bluesy rock is their game, and they play it hard and well.

On August 30th, 2021, Dirty Honey opened up for the legendary Black Crowes, another dirty and bluesy rock band, so the grouping couldn’t have been better.

There may be a new roof on the stage at Red Rocks Amphitheater, but they may need another new one because Dirty Honey blew the roof off the place. For an open-air venue, the air was thick with the bluesy, gritty, dirty rock that the boys know how to deeply dig into. Starting off with Gypsy, Marc (LaBelle, vocals) worked the ground with untethered fury, giving the crowd just a small taste of the sickly-sweet rock they concoct.

Veering through Break You and Take My Hand, they continue to blister one’s ears with such succulent rock. No wonder these guys topped the Billboard Mainstream Rock Songs chart, being the first unsigned band to do so. Then, John‘s (Notto, guitars) furious fretwork, Justin‘s (Smolian, bass) thundering rhythms and Corey‘s (Coverstone, drums) beat tear into a cover of Aerosmith‘s Last Child.

Bearing down with their assault on your eardrums, they continue to play fan favorites Heartbreaker, California Dreamin’, and When I’m Gone. For such a young band, there is no denying the incredible talent these guys have.

Opening for The Black Crowes is a privilege few young bands have had, but that night, they proved their worth. There couldn’t have been a better band to match on the bill. 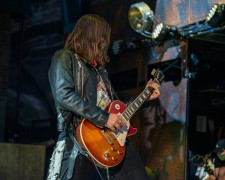