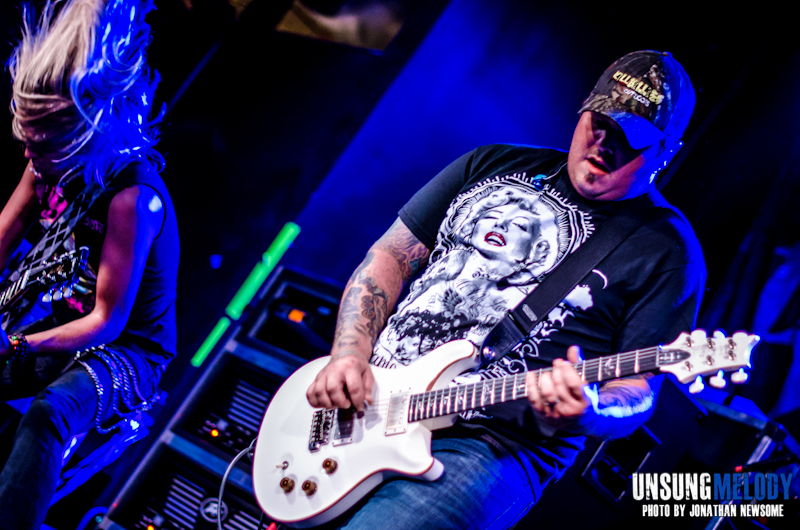 For the second time in six days, I had made my way back to Buster’s in Lexington, KY. This time, it’s a show that featured a ton of old friends and promised to be a great night. The day itself was full of fear for not only the venue, but for the bands as well. Up until roughly an hour and 10 minutes before the doors opened, the electricity was off at Buster’s. So, with no way to soundcheck, load in, shower, or anything else that needed to be finished, the show was looking doubtful. Thankfully though, for all involved the problem was solved, and thanks to an amazing job by all the various crews, the show did indeed go on. This was also the 2nd show that staffer Josh Campbell and I were able to cover together. As spread out as we all are, it’s always great to get together, and to be able to share our thoughts on a show.

I attended the Buster’s Battle Of The Bands the previous weekend to scout out the various bands that were trying to win the spot to open the Black Stone Cherry show. The night was a good showcase of six bands from in and around the Kentucky area. The winner of that night, was a band called Undead Anna. Undead Anna features an old friend of mine, Wade England. Wade plays guitar for Undead Anna, and has been a part of several of my favorite Kentucky bands over the years. Bands like Gear (which will be mentioned again later on) , and Sixth Floor. He’s a great musician, and an even better guy. Back to my point though, the guys came into the competition thinking that a band located closer to the venue would win, but in the end, thankfully, it was all about the music. Undead Anna won the competition and earned the opening spot. On this night, they were a little more nervous, but just as solid. Playing their grunge-infused rock with all the energy you’d expect a young band to bring, and without a care in the world. They made quite a few fans along the way, and gained a ton of momentum. I think this show just simply lit the fuse on this band, and there could be much more to come.

Next up was Indianapolis, IN based Reaul. I still don’t know how to say the band name, but thankfully, they do know how to rock! I’ll be perfectly honest, as I always try to be, the band was a bit too much on the pop/punk side of things for my personal tastes, but I can certainly appreciate talent. Reaul oozed talent. After garnering a few big shows of late, like opening up for Blink-182, the band is generating a buzz that money can’t buy. They delivered a very energetic, well rehearsed show that began with a U2 cover. Which, if you know much about the bands involved on the night, U2 is not really the style of music you’d expect to hear. So, for me that seemed a bit off the mark. Reaul really worked the crowd well though, involving them on such things as what sport Indy is known for. Which turns out they meant racing, which lead nicely into their song Circle City Lights. There was a newer song, which I apologize for not remembering the name of, about a liar. That song really was the highlight of the set for me, and if it’s an indication of the band’s upcoming direction, I’ll be watching closely.

Hitting the stage next was Stellar Revival. They are a band that I was lucky enough to get in on, on the ground floor so to speak. I interviewed bassist Daniel Uricoli back in March. You can read or listen to that interview here. When the band signed to EMI/Capitol Records, the plan was to get the band out there and let them conquer the world. Well, in this strange musical landscape, that takes time. Radio isn’t the juggernaut it used to be, so the label decided to build the band the right way, and put them on tour. Creating anticipation leading up to their release, which is now set for late January of 2013. I see and hear a lot of bands with this site, and most that arrive with a huge hype, don’t deserve it. Stellar Revival is not one of those bands. I’ve had the honor of hearing the album, so I knew what to expect from the band musically, so for me the real test was their live show. The band did not disappoint. At all. Frontman Rino Cerbone has all the tools to carry this band as far as it wants to go. Let’s not forget though, a frontman is only as good as the band behind him, and Rino has a collection of bright, talented, good looking dudes backing him up. This is a band you will know, and I feel you will know well. If you are a fan of radio rock; bands like Three Days Grace, Theory Of A Deadman, or Pop Evil, then Stellar Revival will likely earn a spot in your musical rotation. Highlights of the set for me were songs like I Love To Watch You Walk Away, England’s Best (With of course Kentucky subbing in for England on the night), Love, Lust, and Bad Company, Saving Grace, and of course The Crazy Ones. With their two guitar assault, big choruses, stadium anthem backing vocals, and flat-out swagger, the band won the crowd over quickly. A highlight at any show is when a band takes the time to be with the fans, Stellar Revival did it both on and off the stage. Rino happily obliged the crowd by visiting the railing in front of the stage, and the band met each and every fan after the show. I walked away extremely impressed with this band, and in time, I think you will too. Mark it down, 2013 is going to be a Stellar Revival of Rock!

All of that brings us to the reason close to 1000 people packed Buster’s on this night. Kentucky’s own, Black Stone Cherry. The band has played Lexington five times over the last six or seven years, but they never had the respect they seem to have now. Being long time friends with the band, I’ve watched their journey closely, and without hesitation, I can say I’ve never been more proud of the guys than I was on this night. I saw them earlier in the year at Rupp Arena, but for me that show paled in comparison to the one they put on tonight. Vocalist Chris Robertson sounded better than I have ever heard him, and if you’ve seen the band, you know they were tight, full of energy, and spot-on….all night. I mentioned Wade England earlier, he’s a mutual friend of all of ours, and the band lovingly tipped their hat to one of his previous bands, Gear, by playing their song Piece Of My Dream before walking on stage. That my friends, is class. That’s a perfect example of why everyone who meets Black Stone Cherry walks away raving about how great of guys they all are. The set itself was littered with songs from all their previous Roadrunner releases. Throwing in a few older songs like Maybe Someday, and the unreleased Yeah Man was a great treat. The band chose to bring the intensity with a setlist full of some of their heavier songs. Songs like, Change, Blind Man, Rain Wizard, and my personal favorite Such A Shame. That song for me, is the perfect mix of all of Black Stone Cherry’s influences and abilities. I’d say that it’s one of the best representations of who they are, and who they can be. Heavy, melodic, southern, singable…badass.

The crowd was active often and early, and it was amazing to finally see the band garnering the love and respect that I’ve felt they have long deserved. This was never more evident when the band broke into a stripped down version of Peace Is Free. Guitarist Ben Wells and vocalist Chris Robertson were the only two members on stage for this one, and the crowd sang every single word. Chris was a bit taken aback as he let the crowd take over on several occasions. Seemingly soaking in the moment, and reaping the rewards of all their years of hard work, finally paying off. It was an amazing moment to see, as a fan for sure, but more so as a friend. I was personally grinning ear to ear, beaming with pride.

The band threw in a couple covers on the night. Playing Joe Walsh’s Rocky Mountain Way which led into White Trash Millionaire. One may even go as far to figure that Rocky Mountain Way was the inspiration for the voice box guitar work on White Trash Millionaire. Rounding out the set was a shortened version of Amy Winehouse’s Rehab that brought the hard hitting Blame It On The Boom Boom. As the band always does, they blended the songs seamlessly, and the crowd was enjoying every moment of it. Finishing off the night, was the song that started it all…Lonely Train. The song that put the guys on the map of so many, ended up the night, and tied their career (as well as this show) up with a nice, neat bow. If you have the chance to catch this tour, please do so. For a mere $20 day of the show, you will have an amazing time and get to hang out with some great people. It’s well worth your time and efforts.